We’ve run comedy nights in Upperthong for many a year now and we’re holding our first ever in neighbouring Meltham on Friday 22 May 202o. Not only will it be a hilarious night to remember but we’re raising funds for a local woman to do good deeds in Uganda too! 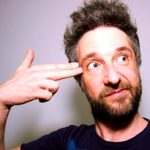 Duncan Oakley powers out a deft blend of stupidity and truly impressive musicianship with hilarious   results. An easy confidence and good natured banter   make him a regular at all the best venues. Lesser musical   comedians hide behind their guitars and use them as a shield but Duncan’s is definitely a sword as   audiences   who have been slain with laughter will gladly testify! 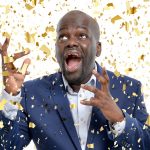 cracking jokes in Canada, then moved to South Africa but has now been resident in the UK for over ten years. Daliso originally wanted to become a vicar but his   love of earthly pleasures made comedy a much   more sensible choice. In the space of a few days he once performed in a Birmingham strip club followed by a Christian festival which is testament to his broad appeal. Daliso now tours internationally as well as having a highly acclaimed BBC Radio 4 series and various other projects. We are delighted to have Daliso appear in Meltham!