Mick Ferry is as comfortable bantering with a crowd as he is at delivering first-class material. A regular at The Comedy Store in London and Manchester, he has performed at every club worth doing in the UK as well as working extensively internationally. Mick also regularly writes for many of TV’s biggest names. Mick was the first ever comedian to be named Best Live Stand in the 2013 UK Comedy Awards. 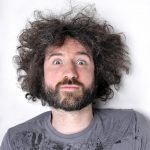 has been described as the bastard son of John Cooper Clarke and fuses together music, spoken word and comedy while keeping his tongue planted firmly in his cheek.

£15 including hot buffet! Doors 7pm for buffet. Show starts 7:45pm  Your compere for the evening is Rob Riley

Please note Acts subject to change. Fully seated. Strong language and adult themes. Over 18’s. We want all our guests to have a great night so we ask that you turn off your mobile and refrain from talking once the show is in progress. As comedians’ material is their personal copyright any form of video or audio recording is strictly forbidden.