Off The Rails Comedy Club, Saddleworth 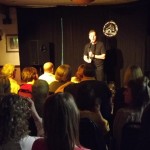 the best independent comedy club in the UK.

Off The Rails has played host to comedy’s biggest names and, more importantly, they still drop back in for secret gigs and tour previews.

In addition to our regular last Sunday of the month nights and preview shows we also host touring shows and regular fundraisers for local good causes.

Off The Rails is a brilliant gig – DAVE SPIKEY