Elland Round Table’s Comedy Evening returns on Saturday 11th May 2019 with full line up here soon. This is who rocked the room at last year’s show;

The good folk of Elland will be treated to Sheffield’s Tom Wrigglesworth as their headline act! Tom is best known for his live storytelling shows and Sony Award winning BBC Radio comedy programmes

which take a comical and emotional look at family relationships. Alongside his comedy work, he’s used his engineering background to become a natural and engaging presenter for BBC Television and The Discovery Channel. 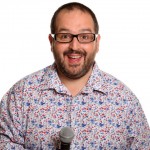 taken several comedy shows to the Edinburgh Fringe and toured the UK.  In February 2015 Justin performed to over 200 000 people in a 15 night stage version of Channel 4’s Phoenix Nights. The critically acclaimed show at the Manchester Arena raised £5 million for Comic Relief. He also won Celebrity Mastermind utilising his vast knowledge of hero Les Dawson.  A natural affability endears Justin to any audience and an arsenal of tightly written material firmly hedges the bet.

“Moorhouse charms the pants off the crowd” Sunday Times

Lost Voice Guy AKA Lee Ridley speaks via his iPad due to cerebral palsy. After watching Ross Noble perform a lengthy set about Stephen Hawking, Ridley threw down a challenge that he could do the better impression. Noble found this so funny he incorporated it into his act and 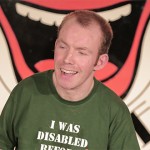 this spurred Lee on to get on stage himself. The results have been overwhelming with several TV appearances, guest writing on Ricky Gervais’ show ‘Derek’ and winning the BBC New Comedy Award

No comedy night would be complete without a compere and we have one of the best in the business!! Both erudite and eminently affable, Roger Monkhouse is a highly original and quirky performer. His trademark stage-prowling style and curious, inimitable manner have established him as one

of the hottest names on the comedy circuit. Roger’s forte is delivering intelligent, thought provoking material that pulls no punches and is always incisive, relevant and up to date. Articulate, quick witted and spontaneous, if something’s in the news, Roger has a routine about it.

“An almost indecent supply of talent” Time Out