Cork’s Chris Kent could well have made it as an electrician but prefers to generate sparks of laughter as Ireland’s fastest rising young comedian. His sharp style preys on his own everyday life and his sometimes brutal self-deprecation makes for a compelling and hilarious set.  Voted as one of the Top Five Irish Comedians by Hot Press Magazine in 2013, he was listed as “one to watch” by The Dubliner magazine the previous year.

Mike Newall is based in Manchester but originally from Stockport. You might be thinking ‘isn’t Stockport in Manchester?’ and you’d be right, but it’s in 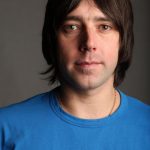 Greater Manchester and some people can be pedantic. Mike’s timing is the envy of performers with ten times the experience and is proof that some people are just funny. His laconic style and demeanour is possible because of the strength of material and on stage presence.

“His timing is pin sharp, his control is deft and his hair is immaculate” The Scotsman  “Effortlessly likeable” The List

Compere for the evening is Rob Riley and introducing Caroline Mabey is in the middle. £10 from behind the bar, or on 07768 537 285.  Show starts 8pm prompt. Very strong language throughout. All acts subject to change. Fully seated.