We started booking Alsager Civic’s comedy nights in 2017 and they’ve been a roaring success ever since! Friday 18th October 2019 sees us return with an old favourite, the funniest comedian you probably never heard of and the very best in emerging new talent!

Now best known as star as William Shakespeare’s manservant Bottom in Ben Elton’s  sitcom Upstart Crow, Gawsworth born Rob Rouse has been a firm favourite on the UK and international comedy circuit’s for many a year.

A natural performer, Rob has many voices in his head and, when unleashed, his shows become more like a hysterically funny play than one man telling very funny tales. TV includes 8 Out Of 10 Cats, Spoons, The Friday Night Project, Grown-Ups and Comedy Shuffle with Rob Rouse.

Winner of a Time Out Comedy Award and a Perrier Award nominee, Boothby Graffoe is a very tall comedian from Hull named after a 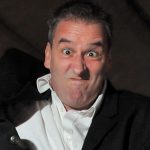 Lincolnshire village. He tells great gags, ranging from the political to the silly and surreal, delivers great anecdotes and isn’t afraid to treat the audience to at least one song.

‘May not yet carry the same kudos as Ross Noble or Johnny Vegas but, at his best, Boothby can leave them stumbling on the starting blocks.’    The Scotsman 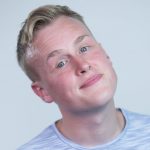 Ultra working class and totally adorable, Josh Jones is a high-energy performer who wins the audience over from the off. This super camp Manchester lad, can tackle a range of subjects from school yard politics to gay rights in Pakistan. Josh is able to improvise on the fly creating razor sharp observations, he is playful with the audience often leaving them wanting more of his brilliant, superbly delivered writing. This fast paced comedian will have the room laughing from start to finish.  Funny, friendly and fabulous.

Clayton Jones completes the bill. Show starts 8.15pm prompt £12 on the door (if tickets left) or £10 in advance.