Master of mayhem, prop lunatic Wes Zaharuk takes audience on a joy-ride of frenzy machine-gun anarchic physical comedy routines and maniac physical audience interaction. Wes has performed  extensively across North America including a stint at at Las Vegas. Now residing in the UK 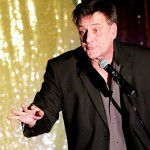 he has one of the most distinctive acts on the circuit. We think we can safely say Wes is the only comedian in the world to successfully mix Film Noir, vaudeville, power tools and a banana into his act.  Wes Zaharuk credits his comic roots to his parents. They made ‘not listening’ an Olympic event.   About the use of power tools in his performance Wes quips;