VIKKI STONE is a multi-talented comedian, actress, singer and musician and winner of The Soho Theatre One Night Stand Up Award. 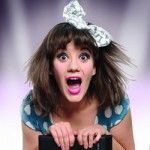 Her unique mix of stand up and musical comedy has made her one of the fastest rising stars of British comedy. She performs regularly across the country at major clubs, festivals and theatres as well as appearing regularly on television.

Her Phillip Schofield Song became an internet hit and was listed in The Huffington Post as The Top Ten Viral Videos in 2012. You may also recognise her from fronting major ad campaigns for Yakult, Fiat and… ..Tena Lady! As musically talented and exciting as she is funny, expect big laughs from this girl with a big voice.