TONY LAW is a Canadian stand-up comedian. He is known for his highly surreal material and delivery, and 1950s Americana style of dress, 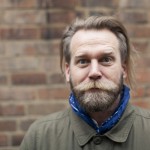 favouring boots with turned-up jeans and a Viking explorer style of hair.

A lot of Tony’s material features tales of his time-travelling exploits in the company of his sausage dog, Cartridge Davison. Cartridge is the eponymous “Dog Of Time” from his Edinburgh show of the same name, and has appeared with Tony on ITV’s Comedy Cuts.

TV appearances include Have I Got News for You, Russell Howard’s Good News, Never Mind the Buzzcocks and 8 Out of 10 Cats