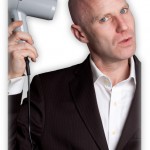 stage persona while his fellow Mancunians  were shaking their thangs down at The Hacienda.

A former ‘City Life Comedian Of The Year’ Tony has collaborated with Johnny Vegas, Stewart Lee and Steve Coogan to name just a few. In addition to performing Tony is also an established comedy writer and actor having written BBC’s prison visiting room sitcom ‘The Visit’, in addition to writing on ‘Ideal’ and appearing as Moz’s brother, pirate radio DJ ‘Troy FM’.

“Last on was Tony Burgess, whose put-downs were sharper than a Stanley knife.”  The Visitor