Since arriving in the UK, Canadian émigré Tom Stade has steadily earned a reputation as one of the most original and exciting stand-up 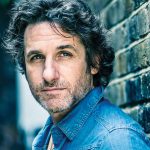 talents around. He instantly made a splash on the UK circuit with his magnetic stage presence, irrepressible charm and first-class story-telling, and after years topping the bill and playing at international comedy festivals around the globe, he is now established as a leading touring act in his own right, and finds himself well on the road to being a household name.

Tomʼs irrepressible charm translated effortlessly to TV, and he has been invited onto every major stand-up TV show in the country including Live at the Apollo, Michael McIntyreʼs Comedy Roadshow, Lee Mackʼs All Star Cast, Edinburgh Comedy Fest Live, The Boyle Variety Performance. Stand-Up for the Week and Daveʼs One Night Stand. He also co-wrote and co-starred in Frankie Boyleʼs recent Channel 4 series Tramadol Nights.