Tom Deacon is one of the hottest young stand-ups on the circuit today, having already performed on The Rob Brydon Show and 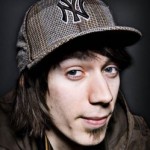 From 2007 Tom presented The 5:19 Show, a youth orientated programme for BBC Switch, featuring comedy sketches, music and celebrity interviews. The show aired daily online and on Saturday mornings on BBC Two. March 2010 saw Tom host of his own show on BBC Radio 1 and he has also worked for Capital FM

‘With looks, confidence, charm and great material, expect other comics to lynch him’  Sunday Times