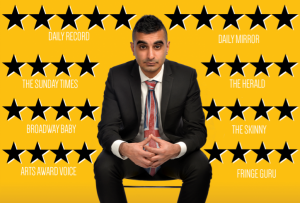 Some people simply have a natural ability for what they do and that certainly seems to be the case with Blackburn’s former civil servant Tez Ilyas. Within months of first picking up a microphone this former civil servant from Blackburn found himself in the finals of no less than eight comedy competitions, within a few years he won the BBC New Comedy Award and 2017 will see him embark on his first national tour!

Within three years he had written his first hour long show – TEZ Talks. Based on the popular TED Talks the show dispelled myths about Islam in general but particularly about British Muslims. Despite the somewhat sombre subject matter Ilyas worked his comedic magic and the show stormed the Edinburgh Fringe, sold out an extended run at a prestigious London theatre and was turned into a popular series by Radio 4!

Tez has now made numerous TV appearances in addition to creating and performing in comedy shorts for both the BBC and Sky. 2017 sees Tez take his first UK tour on the road.

“Blackburn-born Ilyas has a slickness more reminiscent of US comics, and the gags to back it up, though his most prized asset could yet be his bold, subversive streak”   The Guardian

TV and Radio Appearances Include….
The One Show, Live From the BBC, Man Like Mobeen, Go Home Office, The Fast & The Fool for BBC, @elevenish for ITV2, Virtually Famous for E4, The Funny Thing About for Channel 5 and Tez Ilyas’ Christmas for Sky Arts as well as TEZ Talks, The News Quiz and The Now Show for BBC Radio 4