Steve Royle holds the world record for balancing a Christmas tree on his chin. Not satisfied with that he also holds the record for balancing an ironing board on his foot. ‘Nuff said!   Despite being a highly skilled juggler Steve never forgets the comedy and has a highly honed arsenal of one liners and routines suitable for any audience. Resident 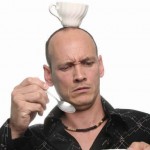 warm up man for Sunday Night At The Palladium Steve also played to 200 000 people and earned £5 milion for Comic Relief alongside Peter Kay and Dave Spikey as part of 2015’s Phoenix Nights Live.

Steve was also described as “A brilliant comedian” by  Peter Kay in his last book.