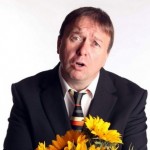 observations have made him one of the firm favourites of the comedy circuit.

Steve’s original comedy songs combine razor sharp lyrics with tunes that put their foot in the door of your mind and refuse to leave. Firmly based in rock ‘n’ roll and refusing to pull no punches, these are not the ‘oh so witty’ ditties of penguin-suited plink plonk piano playing posh gobs. They are that rarity – comedy songs which are actually funny.

Steve was one half of Eighties comedy duo Skint Video who were at the forefront of the burgeoning ‘alternative comedy’ scene. After 13 years, Steve went solo and now specialises in bang up to the minute, short sharp, topical songs. Steve has performed around the world and has appeared at every Glastonbury Festival for the last twenty years.

His proudest achievements to date are upsetting Jim Davidson to the point where he described him on his blog as a “Socialist Scouse ****” and his parody song of Oasis that resulted in Noel Gallagher sending word via his management that he was really upset about it!

‘You can count the number of truly imaginative comic singers currently on the circuit on the fingers of one hand. One of this select band is Steve Gribbin.’  Time Out

‘Satirical songs are hard to pull off successfully, but if anyone can do it, Steve Gribbin can. In fact, he pulls it off with real aplomb.’  The Independent

“A highly refreshing and original comic with a gift for sharp observations and up-to-the-minute political asides… With more energy than a friendly Tasmanian devil, this affable and animated comedian tells jokes, plays the guitar and sings lyrics.” The Scotsman