Stephen Grant is respected not only for his work ethic and versatility but also for being very, very funny. Whether it’s a feisty audience at a comedy club, a warm up for 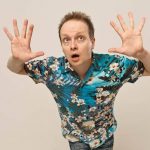 a TV audience or performing a bespoke set for a corporate awards evening Stephen never fails to pull in the laughs.

He has won the Chortle Awards ‘Best UK Compere’ twice now with the experience gleaned from his long running residency at Komedia, in his hometown of Brighton. He also regularly performs at London’s prestigious Comedy Store.

Grant made national headlines in 2010, when his ex-wife tried took legal proceedings to stop him telling jokes about their divorce! Stephen’s solicitors were forced to use the freedom of speech provisions under the Human Rights Act although, at the time, Stephen said “The issue of my divorce is the most honest work I have done.”

He possesses an energy and intellect which combined with his eight years in the corporate world make for a perfect experienced host and entertainer for any event. Clients often return to Stephen for repeat engagements due to his ability to vary his content and material, often tailoring it specific to the client’s requirements and industry.

When not doing all of the above he still finds time to perform at comedy clubs across the UK and abroad as well as writing for Rob Beckett on Mock the Week, for Russell Kane on Live at the Electric, Lee Nelson’s Well Good Show, Seann Walsh for Channel 4’s Stand Up For The Week and a virtual litany of one-liners for various Radio 1 DJ’s!