The legend that is Sol Bernstein escaped the pogroms in Russia, the Nazis in Germany, and went on to become the world’s first all round 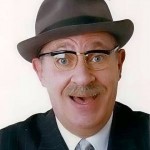 entertainer; a comedian, a magician, an actor, a jazz musician (Sol was rated ‘Best Triangle player in the USA in the 50’s by performers like Louis Armstrong and Duke Ellington ).

Also rated the best impersonator EVER !! He’s performed all over the world at venues including The London Palladium, New York’s Carnegie Hall, The Paris Olympia, and Caesars Palace Las Vegas. He’s also a regular performer at The Sydney Comedy Festival, but it’s at comedy clubs where Sol really comes to life. His charisma, his style, his chutzpah, put it all together and you see the magic that is Sol Bernstein.

He’s the man who helped the career’s of Elvis Presley and Marcel Marceau (and never even got a “Thank you”) and even the Beatles were influenced. He’s worked with, and been friends with, some of the worlds greatest performers, Elvis, Judy Garland, The Rat Pack, Lenny Bruce, Jack Benny, George Burns, Milton Berle. The man is in his 80’s and still performs at all the top UK clubs.

“ One part Alf Garnett, two parts Mel Brooks, and three parts like nothing you’ve ever heard” The Guardian