As a fifteen-year-old Liverpudlian schoolboy, Simon Bligh was told by his headmaster that he would go to hell. His mum wanted him to be a 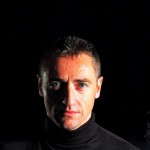 priest; he wanted to be a plumber. His dad was a mad Catholic Communist; he was a Kung Fu mad Buddhist. Growing up in Toxteth, his childhood was odd, but full of strange passions. Philosophy and Zen, leather trousers and motorbikes. Japan, unarmed combat and stand up comedy. The young Simon loved comedy and, upon seeing a Richard Pryor film in an empty Manchester cinema, he realised his true calling. He knew he should be a comedian. Faced with this revelation, there followed a decade of travelling, teaching and trying to pluck up the courage to ring for open spots. Finally, he did it. He hasn’t looked back since.

Simon is now one of the finest, and most sought after performers in this country, and beyond. With a Time Out Comedy Award and Perrier Award nomination under his belt, Simon is in great demand. His cheery, conversational manner and manic storytelling involve acute observations and he juxtaposes a cheery, affable conversational style with a wild, frenetic and fast-moving performance engaging audiences in a whirlwind of unadulterated comedy.

Simon has made appearances as far and wide as Dubai, Hong Kong, Thailand, America, Malaysia, Amsterdam, Germany and France.

He also worked with Channel 4 on ‘Dojo Rising’, where he indulged in his love for martial arts and took a look at all aspects from Kung Fu to Capoeira to the ‘beat ‘em up’ video game phenomena.