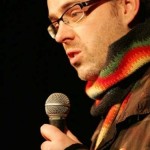 renown although previously best known for his regular appearances alongside Johnny Vegas in BBC’s ‘Ideal’.  Having worked around the world in street theatre Seymour also trained as a circus clown before finally taking the plunge into stand up.

With the highly transferable skills of his two previous trades he was soon headlining at all the major clubs in the UK and is a former City Life Comedian of the Year alongside Peter Kay, Alan Carr, John Bishop and Jason Manford

“Always fun to watch, wilfully odd, yet compelling” The Scotsman

“More variety than a whole week of CBBC.”  Chortle

Click to here to enquire about booking Seymour Mace