SAM GORE cemented his position on the circuit with no less than five New Act of the Year titles shortly after starting out. He has since gone on to 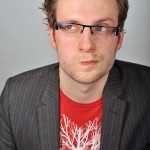 impress as both an act and an MC everywhere from weekend clubs to music festivals, biker rallies and theatres.

“The jokes are as cruel as they are funny, i.e. very… a class act indeed”  Chortle