Crawley’s ROMESH RANGANATHAN has spent the last few years spreading his cynical gospel. Having forged his comedic talents in the furnace of 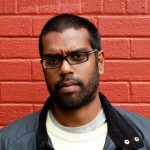 secondary school Maths teaching, he has transferred his skills to developing a reputation for being consistently hilarious. Romesh uses his background and mixed race marriage to influence much of his comedy without falling into the usual world weary or cliched stereotypes.

A sharp and funny writer he has penned gags for John Bishop and Seann Walsh. Romesh was recently crowned the 2013 Leicester Mercury Comedian Of The Year alongside past winners Rhod Gilbert, Johnny Vegas and Jason Manford.