Former geography teacher Rob Rouse has been a mainstay of the circuit since winning the prestigious ‘So You Think You’re Funny?’ competition 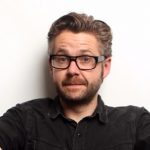 in 1998. A natural performer, Rob has many voices in his head and, when unleashed, his shows become more like a hysterically funny play than one man telling very funny tales.

Rob is also proud to be one half of the driving force behind Rob & Helen’s Date Night Podcast which you can listen to here.

“The tears of laughter came in floods”  Edinburgh Evening News  “A born clown, a latter day Stan Laurel” Time Out