Rich Wilson has loved comedy ever since his neighbour gave him a cassette of Eddie Murphy’s ‘Delirious‘; 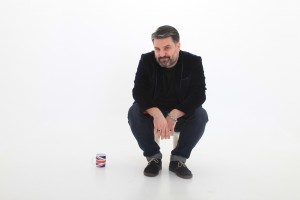 “It was the most mind blowing thing I’d ever heard. My young ears had never heard language like it.”

Rich’s comedy aspirations lay dormant until he ended up working behind the bar at South London’s Up The Creek comedy club;

“It was the most amazing job ever. I was in awe of the comics that appeared every weekend.”

One of the club’s regular comedians, Rob Rouse suggested Rich give stand up a go;

. “You have a cheeky smile and a glint in your eye. You’ll be good at it.”

2004 saw Rich summon up the courage to take his first faltering steps steps out onto the stage at The Bullingdon Club (We’re assuming not that one) ;

“I was booked to do five minutes and I managed about two and a half before I legged it. I’ve never known fear like it.”

Since then Rich has become a regular at all the major comedy clubs up and down the country including The Comedy Store as well as performing in New York, Las Vegas and entertaining the troops in the Middle East.

Topics covered range from being a young father to life’s general absurdities A stylish delivery helps Rich tame the tougher weekend crowds with a commanding presence and precision timing but there’s plenty for the comedy connoisseur too.