Whether he is engaged in super quick audience interaction or telling a hilarious shaggy dog story, Raymond Mearns is one of the UK’s finest circuit comedians. 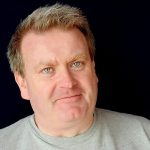 Playing to audiences at the country’s best venues every week has sharpened Raymond’s comedy skills to the point where he is flexible enough to perform in front of anyone, whether in a big city theatre or an intimate club room.