Hailing from Glasgow, Ray Bradshaw had quickly gained a reputation as one of the funniest and most dependable acts on the Scottish comedy 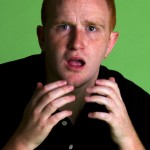 scene, all while still in his early twenties.

A double Scottish Comedian of The Year Finalist, Ray has travelled the lengths and breadth of the country telling jokes to anyone that will listen and has produced stand-out festival performances at T in the Park and RockNess.

Ray has now brought his talents south of the border,just the first steps in bringing the ginger revolution to the rest of the United Kingdom.

Ray is one of the regular comperes at our Lancaster show