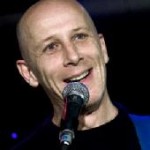 Commons, labouring on a gas pipe line in Qatar, in the Middle East, and teaching drama to the mentally ill. In the early days he worked as a support act to Lenny Henry and Rory Bremner; appeared in the West End with Rita Rudner; and toured with The Flying Pickets, Willie Rushton and Barry Cryer.

He has been an audience favourite on the comedy circuit for many years, and has headlined at clubs throughout the UK, Europe, the Middle East and Asia. He has completely re-invented his act several times (from the early days of acrobatic spectacle and frivolous audience abuse – where he was described as ‘far fetched and semi dangerous’ by Time Out).

In a more recent incarnation he was found wielding an electric squash racket – ‘must be seen to be believed’ Chortle; ‘comedy rock and roll heaven’ Hot Tickets.

His relaxed amiability is defined by a compelling conversational style and absurd guitar posturing. His ‘songs’ are jokes that rhyme, set to a guitar backbeat, never travelling down the easy route of song parodies. He covers topics from love and hate, to sex and politics with a totally original voice, delivering his material with charm and irrelevance.