An ex-reality star from a small fishing village off the coast of Portugal, PHILBERTO has been enjoying the English comedy circuit for the past 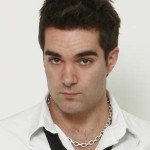 few years, during which time he has established himself as a regular headline act. A frustrated rapper with a rare form of ‘Dance Tourettes’ he is often unaware of why an audience is laughing and whether it is with him, or at him.

He has a vibrant bug-eyed energy and hard hitting style that makes twenty minutes disappear in the blink of an eye. There’s something captivating about the way he takes an absurd idea and runs with it. He’s particularly good when riffing off the audience. As a character too, this talent-free wannabe has dramatic potential, particularly when the manic energy tips over into something darker…

Philberto is the creation of English comedian Milo McCabe.