Whether it’s comedy clubs or corporate events PHIL WALKER is a comedian for all occasions. Phil`s career has seen him perform in 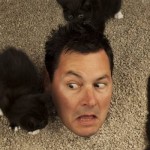 a scout hut in Unst ( Shetland Isles ) to a portacabin on Mount Alice ( Falkland Islands ), basically he`ll go anywhere for a laugh!

Phil is proud to have entertained over 4000 troops on tours in war torn Afghanistan as which he describes as, “I`ve played to some tough crowds in my time but they where never armed with machine guns before. Thank God they liked me!” His act has become a firm favorite with the armed forces and also seen him perform in Kosovo, Kuwait, Bosnia and Germany.

Phil started his career on the tough holiday park circuit working for  Butlins. At the turn of the millennium he decided a change of direction was needed in order for him to progress, so after an open spot at Manchester’s Frog & Bucket comedy club he turned his attentions to the now burgeoning circuit. Within a very short space of time he was voted City Life Comedian Of The Year, at the famous Comedy Store in Manchester Previous winners include Peter Kay & Steve Coogan .

As well as regular gigs at the Comedy Store where he was also part of the successful M.E.N. At Work topical improv nights, Phil has become a headline act at most of the leading comedy clubs throughout the country including the Jongleurs comedy club chain, Highlight comedy, The Stand, The Last laugh, The Frog and Bucket, Komedia, The Hyena, Comedy central.

Festival performances include one hour shows at Liverpool, Manchester, Brighton, Southport, Sheffield and the 2012 Edinburgh Fringe Festival where he received four star critical acclaim for his show “Is This It?

Best known on the telly for hosting three series of ITV’s Talking Telephone Numbers phil has made numerous other appearances and is an experienced voice over artiste. He’s also a dab hand at panto for various employers including Stage World Wide Productions. If you’re stuck for an Idle Jack, Simon, Wishee Washee, Billy or a Buttons then Phil is your man.

“His set moves seamlessly and seemingly effortlessly. The gags and observations keep on coming thick and fast, He can pretty much guarantee a good night out, Walker is crackingly good!”  Chortle

“Comedian Phil Walker continues to evolve in leaps and bounds and his material is as up to date as tonights news.”  The Stage