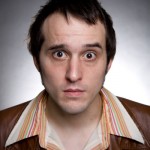 think on his feet meaning there is always a slight twist to his set, making each appearance fresh and thrilling.

Phil hosted and  co-created the anarchic kid’s show ‘Funz and Gamez’ alongside Mick Ferry, Will Duggan and  Jim Meehan. The cult hit of 2014 Edinburgh Fringe was initially ignored by the judging panel until an ad hoc campaign of critics and comedians swayed their decision and they won the coveted Panel Prize for shows that best represent the spirit of the Fringe.