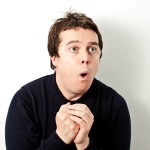 comedians have compared him to the late Tony Hancock.  Paul’s assured delivery and beautifully observed material lead to bizarre flights into silliness and darkly gleeful rants.

Television executives were quick to notice Paul’s talent and he regularly appears on BBC’s ‘Impractical Jokers’ as well as ‘Russell Howard’s Good News’ and Comedy Central
“A total natural, his storytelling is utterly unique, never anything less than gut-bustingly hilarious” GQ         “Really f***ing funny” Frank Skinner
.“Likeable, animated and fluid with a first-rate sense of timing, able to effortlessly maintain an illusion of spontaneity he has a stylish way of slowly building up on his observational premises, wringing every possible laugh out of it” Chortle