Lovable scally Nige is the creation of failed singer/musician Keith Carter and saved him from a life of temping. 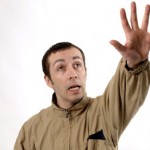 Nige’s seventh comedy gig was as a finalist for the BBC New Comedy Awards in 2001, since then he has travelled throughout the world, supporting many top comics such as Ricky Gervais and Johnny Vegas. in 2005. Capital of Culture judge, Sir Jeremy Isaacs was quoted in the news as saying, ‘He helped Liverpool win the bid,’ after seeing Carter’s comic creation and Liverpool cult hero, ‘Nige’ perform at the cultural bid show for the judges.

The two highlights of Keith’s showbiz career are having his one and only single played by John Peel and accidentally knocking George Martin into an ice sculpture whilst drunk. Carter is proficient on guitar, harmonica and piano and can’t believe he is getting away with not having a proper job. He is currently waiting for someone to tap him on the shoulder to tell him it’s all over.

‘A character comedian of rare skill.’ The Guardian      ‘Give this man a sitcom.’ Edinburgh Evening News