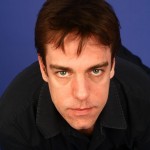 Nick Doody ‘s  career as a stand-up got off to a pretty good start, when Bill Hicks asked him to support him on his final tour of the UK.  Sharp and topical – he’s not afraid to say what he thinks; his brand of political comedy and satire has won him fans all over the country…in fact all over Twitter as well, where he’s polled as one of the influential names in British comedy.

Nick features frequently as a guest on radio and vox-pop television shows and has written for 8 Out Of 10 Cats, The Late Edition, Radio 4’s The Now Show and Armando Iannucci’s Charm Offensive.

“Intelligence, originality and some cracking gags to boot” Metro        “I love Nick Doody”. The Independent