Raised on a diet of ‘Blackadder and Monty Python, Bottom, loads of Red Dwarf’ NAT LUURTSEMA had long hankered after a career in stand up. 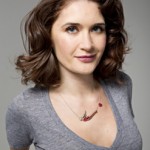 Well and truly smitten by the comedy bug Nat was nominated as Best Newcomer by comedy industry website Chortle and sine then things hve comtinued to move onward and upward.

Nat is one third of sketch group Jigsaw with Tom Deacon and Dan Antopolski. She is also a published author with Cuckoo In The Nest, an account of a twentysometing moving back in with her parents now out in paperback.