Mrs. Barbara Nice (or Janice Connolly in the real world) is a much loved mother of five from Stockport who believes in bargains and getting the 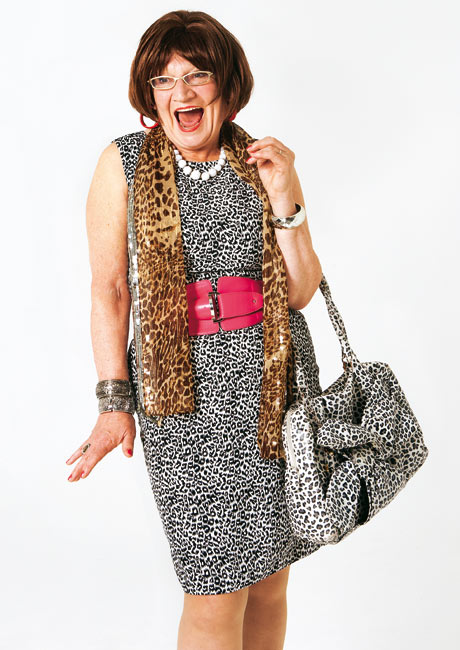 most out of life. Ergonomically correct, she doesn’t drive and travels the country by National Express coach and her husband knows nothing of her burgeoning comedy career. He thinks she`s either at Bingo or dog sitting.

She has been compared to the following –Victoria Wood , Mrs. Merton , Janis Joplin, the Shake `n` Vac woman , Julie Walters and Patti Smith.

Janice was spotted by Peter Kay as Barbara at the City Life Comedian Of The Year final  that he had won the previous year. Other winners include Alan Carr,  John Bishop and Dave Spikey.

He asked her to be in his new TV series ‘That Peter Kay Thing’  and she then went on to star in both series of ‘Phoenix Nights’ as God fearing Holy Mary. Other TV includes playing Peter`s mum in Coronation Street .’Max and Paddy’ as Holy Mary again – Dave Spikey`s ‘Dead Man Weds’ as Carole and BBC2`s skating rink comedy ‘Thin Ice’.

“The malapropism spouting Stockport Housewife is a force of nature –energetically cajoling the audience to take part in her hare brained stunts and injecting an unbeatable air of fun and excitement into the room.”   Chortle