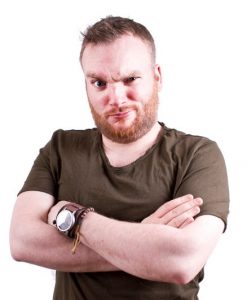 Belfast’s Micky Bartlett first performed stand up as it was a requirement of his drama course at university! Fortunately, the student crowd loved Micky and Micky loved stand up. Unfortunately, Northern Ireland had no small comedy clubs at the time so Micky was instrumental in setting up quite a few including Mason’s in (London)Derry* where he became the resident compere.

At the tender age of twenty two he entered BBC Northern Ireland’s ‘Find Me The Funny‘ which involved a series of comedic challenges which culminated in Micky headlining to a thousand strong crowd at Belfast’s Ulster Hall.

With his reputation spreading across the country he has been much in demand for both TV and radio work with the aristocracy of Irish comedy including Jimeoin, Patrick Kielty, Andrew Maxwell and Neil Delamere.

In addition to the usual Edinburgh Fringe appearances Micky has also been extremely well received at the Glasgow Comedy Festival as well as Glastonbury and T In The Park.

“Bartlett is a stand-up natural with a great command of the audience and engaging everyman approach, full of verve… joyously spirited … A masterful way of delivering with punch and style… for a devastating … pay-off … Impressive!” ✶✶✶✶ Chortle

“Micky has everything it takes to be a huge star… in years to come, people will be talking about the time they first saw Micky Bartlett… One of the most consistently funny people I’ve ever worked with” Adam Hills

*We’re not even going to get involved in that one.