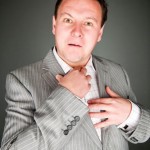 Mickey has worked the globe with stints in such as far-flung locales as, Johannesburg, Zagreb, Kigali, New York, London, Brussels, Amsterdam and Dublin not mention favorites Wellington and Auckland where he was voted Best International guest two years running by the NZ comedy guild.

Since storming the Adelaide Fringe and Melbourne International Comedy Festival in 2000, Mickey is now veteran of over a decade of international comedy festivals. Mickey D has performed across the UK, throughout Europe and the States and acquired an impressive list of TV and radio credits.

His previous sell-out shows in Edinburgh include; ‘Mickey D has Detention Deficit Disorder’, ‘Mickey D was a Pub Kid’ and ‘Velocity Boy’.

‘The evenings brightest spark is Mickey D, a loud demonstrative Australian with a masterful command of his audience and a quick wit.’ The Scotsman