Markus Birdman lost all three of his parents at an early age when they leapt from a hot air balloon wearing parakeets. They weren’t 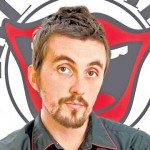 dyslexic, they were idiots. Only his father left a good-bye note saying he would miss them. Sadly this proved not to be the case when he landed smack bang on top of Markus’s elder brother.

Maybe you saw Markus lose the BBC and Daily Telegraph New Act 2001 Finals (he was robbed) or in Avalon’s Comedy Zone 2002 (he was robbed again) or in Francesca Martinez’s ‘I’m Perfect’ 2002 (he robbed her). You didn’t see him at the Melbourne Comedy Festival 2003, because you don’t have that kind of life. You might have caught him winning the SpikeFest New Act of the Year 2001, if you lived nearby.

Damn it he’s played every toilet from Berlin to Sydney, from Glastonbury to the Globe Theatre, you must have seen him somewhere. If not then come witness his tall-tales of shooting puffins, Korean lullabies, tickling Germans, how to remove a python from your foot, and a superb joke about rabbis.

‘Controversial, witty, hip and silly – made me laugh so hard it hurt.’ BBC