Once described as “as frisky as a terrier on heat”, MANDY KNIGHT is a true dame of British stand-up comedy. The first female comedian to 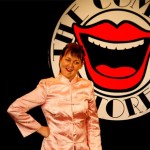 compere The Comedy Store, Mandy has been breaking down barriers all her life.

After a traumatic childhood of abuse and social uncare, she attended the famous Webber Douglas Academy of Dramatic Art. After becoming fully-trained as a classical actress, and then using her diploma to spend four years in the traditional acting alternative career as a waitress, Mandy Knight decided to ditch the period frocks and the pinafore and enter the world of stand up comedy. When asked why, Mandy said it was due to an irrational fear of a life in fringe theatre, exploring her inner child by pretending to be an oak tree, a fridge or a tambourine.

It is a decision she has never regretted. After almost 20 years as a comedian, Mandy Knight remains one of the most respected and loved stand-ups in the business by both fellow comics, promoters and punters alike. As a stand up Mandy Knight has headlined all over the world and has deservedly scooped the Best Female Comedian title at a host of different awards ceremonies over the years, including the Time Out Best Female Comic gong.

A brilliant compere, host and stand-up, as well of course as an actress, she has used her combined talents to perform three one-woman shows in Edinburgh, London and Sydney with the brilliant titles of “I Might Be Single – but The Voices Keep Me Company” , “Some of My Best Friends are Ginger” and “I’m In Love with the Singer from Pulp”.