KEVIN SHEPHERD moved from his native town of Bognor Regis with a burning ambition to become a successful stand up comic. Once he had 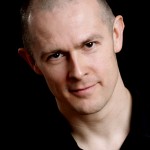 conquered his initial fears Kevin quickly became a regular at many clubs and in 2006 performed his very well received Edinburgh show Comics Die in Hot Cars.

His friendly face and manic energy are proving successful with all types of audience. He is equally at home performing a set or compering.2009 saw Kevin support Mickey Flanagan and Ivan Brackenbury’s Hospital Radio Roadshow on their national tours. 2013 sees him helping direct, write and edit Tom Binns’ 2013 show ‘Ian D Montford : Psychic Fayre and he will also be directing Milo McCabe.

As well as performing live stand up he has been a regular co-host on The Grid a motorsports show on Sports TonightLive, has a regular Formula One Podcast (Another F1 Podcast) with fellow comic Terry Saunders. He was also Ralph Fiennes’ body double in Harry Potter and the Deathly Hallows!

He has written for BBC television (CBBC F1 Red Button coverage) and Radio 2 (Hot Gossip with Claudia Winkleman) and with Tom Binns on his triumphant Radio 2 series ‘Ian D Montford is Unbelievable‘.

In short he has travelled the length and breadth of the country and even travelled as far a field as Bahrain. However his love of performing means that his mission to entertain the world has only just begun.

“Very funny, Did a tough gig in Torquay the other night and was a pleasure mainly due to this mans professional compering skills. Warm, friendly and fun to watch. I’d say in the next couple of years he’ll be Mc’ing the big venues and you won’t be able to afford him, so book him now.”  Jason Manford

“Kevin Shepherd is a charismatic young man with a sharp wit and cheeky humour the audience was taunted, with varying degrees of force. But only the faint-hearted or excessively squeamish failed to warm to such an amiable battering, and, after all, audience involvement is what stand-up is all about.” Bahrain Extra.

“He then gave way to Kevin Shepherd, who packed the next 20 or so minutes with as many jokes as some comedians manage in an hour. He switched between anecdotal and punchline based humour with ease, and left us eager for more.”  BBC Lincolnshire