Best known to British audiences for his appearance on BBC’s Michael Mcintyre#s Comedy Roadshow, Keith Farnan has also adapted his own 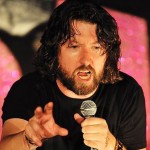 comedy documentary for RTE, Money, Money, Money: Keith Farnan versus the Economy, Keith has just topped an outstanding eighteen months by appearing at the Montreal Just For Laughs All Access show for the Canadian Comedy Network and Hollands highest rating comedy show, The Comedy Factory. In America, Showtime have Keith has appeared on their new standup show, Live From Amsterdam, which brings together the best American and European comedians working today.

He has performed as a stand-up all over the world, from Montreal to Amsterdam to Hong Kong. His four Edinburgh Festival shows have proved a powerful mix of the personal and the political and have sold out their runs at the major comedy festivals in the UK as well as the Soho Theatre and Royal Festival Hall in London.

“If Eddie Izzard had been Irish, he’d surely have turned out a lot like Keith Farnan” The Scotsman

“Brilliant, thought-provoking and laugh out loud funny” Time Out

“Artful, satirical…with a lightness of touch and a hefty helping of roguish Celtic charm” Sunday Times