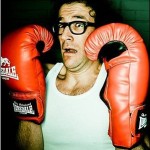 Raised as a Buddhist, this ex-public schoolboy then trained as a Rabbi before being kicked off the programme for being caught with a naked (non-Jewish) girl. A career in stand up was probably inevitable.

TV includes ‘Alan Davies: As Yet Untitled’ with Eddie Izzard and Bridget Christie,two series of The Comedy Store, World Stands Up and Comedy Blue. Josh wrote and presented Sky Movies’ The Movie Geek for four years. His debut Radio 4 sitcom ‘Josh Howie: Losing It’ is due to air in 2016.

Josh regularly contributes to The Guardian, The Times, and The Daily Mail

“There’s a distinct (and lovely) whiff of the Woody Allens.”  The Independent

“Diamond-sharp wit and no small degree of daring.” The Guardian