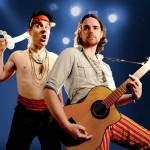 comedy clubs and festival audiences roar with laughter. As much a treat visually as they are musically Jollyboat bang out the tunes with tongues firmly in cheek and always with one (patched) eye firmly on the funny.

Despite having a bit of a ‘thing’ for anything even vaguely piratey the lads are more than happy to get carried away over Star Wars and Game Of Thrones and the sentimental schmaltz behind X Factor winners too. Oh, and if you’re in love with a Disney princess then you might want give them a miss unless you are happy to have your illusions cruelly and cynically shattered.

2011 saw the brothers win the Musical Comedy Awards, and their Edinburgh Fringe show received 5 star reviews and a glowing recommendation from The Independent.

“Their uproarious pirate schtick is easily the equal of any other musical pastiche, ranging from Joy Division to the Spice Girls, by way of Katy Perry and Abba.” FringeGuru