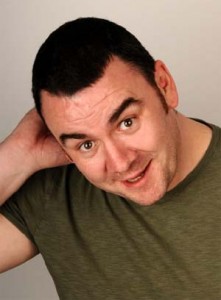 Dubliner Johnny Candon‘s daft interpretations of the world in which we live has delighted audiences as far afield in Australasia and both the Far and Middle East as well as a fair share of Europe.  He has toured nationally with John Oliver and supported Ricky Gervais on his hugely successful ‘Animals’ tour.

He regularly performs at comedy festivals all over the world with Edinburgh shows including BBC Comedy presents…, Tony Law – Revenge Of The Dog Of Time, The Book Club and he debuted his first solo show ‘One Careless Lady Owner’ back in 2008.