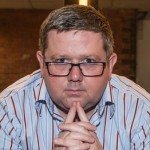 John Warburton has headlined comedy shows from Doncaster to Dubai, and at lots of places inbetween. His award-winning powerhouse performance will leave you gasping for breath and his unique blend of jokes, comedy songs and surreal flights of fancy make him a sure-fire hit with any crowd.

John made his big screen debut in 2010 alongside Robert Carlyle, in big budget action thriller The Tournament. Before turning to comedy John was a tabloid journalist, although he says he wasn’t very good at it. Which is a shame because he did it for bloody ages.

Touched by fame from an early age as a child he was baptised by the father of Timmy
Mallett (apologies to anyone born after 1990 who won’t have a clue what that means),
and was taught biology at Altrincham Grammar school by Fred Talbot (again, apologies).

“Warburton is much in demand. His set bursts with clever wordplay and smart-Alec asides. Five stars.” Time Out