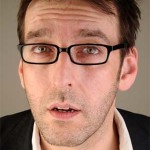 creator of The RDA (Recommended Daily Allowance), a daily late-night topical comedy talk show, which played heavily with the conventions of the genre[1] The show ran for 60 episodes until BBC Choice was rebranded as BBC Three.

In 2003 Gordillo made the final shortlist of two comics being considered by the BBC as a full-time replacement for Angus Deayton as host of Have I Got News For You, although Gordillo has never guest-hosted the show. Gordillo was screentested but the BBC offered the job to the other contender Alexander Armstrong before eventually deciding to employ neither comic and instead continue with the guest presenter format.

Gordillo returned to stand up in 2006, taking three critically successful solo shows to the Edinburgh festival in 07, 08 and 09. He has written and directed extensively for TV and live comedy, including a long partnership with US comedian Reginald D Hunter.

2016 saw Gordillo win Best Show Award at Dave’s Leicester Comedy Festival despite it being a brand new work in progress on it’s first full outing and not even having a proper show title. John will be previewing ‘Love, Capitalism’ across the country this summer before taking it to the Edinburgh Fringe Festival.

“Gordillo is an inspiration, a consummate performer with an amazing talent, passion and intellect. If you are after cheap, silly laughs avoid this, but if you want intelligent, moving comedy with a point, then you cannot afford to miss it.” Chortle

“Gordillo’s intellectual yet heartfelt show makes the personal political with the sort of relaxed intelligence associated with Reginald D. Hunter, whose shows Gordillo used to direct. Heartfelt, intellectual or angry, he’s dynamite. It’s the kind of show that makes you delighted to be at the Fringe.”  The Times

“a grown-up comic who combines emotional intimacy with high-quality gags… You may not find a more accomplished Fringe show.”  The Guardian