Mock The Week and Have I Got News For You regular Jo Caulfield as born in Wales to Irish parents and brought up in Derbyshire, 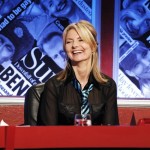 Nottinghamshire and Leicestershire. She grew up believing the East Midlands was her oyster.

Jo spent many years honing her skills as a waitress and was frequently fired for arguing with customers.

“I wasn’t a very good waitress. I was a real maverick. I played by my own rules. I took orders from no one.”

Jo moved to London at 17 to sing and play drums in a Rockabilly band. This was an unusual decision as Jo can neither sing nor play drums.

To misquote the Human League, Jo was working in an Italian Restaurant when she found herself drunkenly entering an open mic competition. Although she hadn’t prepared anything and could hardly stand, let alone speak, Jo won the competition and was asked back the following week.

She then opened her own comedy club and performing every week for 5 years gave Jo her ability for bantering with the audience and improvising on their comments.

Although best known for her legendary one-woman shows Jo has also won a BAFTA as Graham Norton’s head writer and recent TV appearances include: Never Mind The Buzzcocks, Saturday Night Live, The Comedy Store, The Comedian’s Comedian, Dawn French’s Girls Who Do Comedy, The Stand Up Show and World Stand’s Up.

“One of the finest female comics at work” The Observer    “She is, quite simply, a damn funny woman” The Scotsman