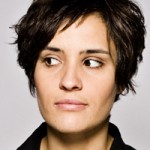 After performing in front of the legendary Spike Milligan and receiving the luminous and prestigious title of having ‘a great pair of Bristols,’ Jen knew that comedy was the way forward. So with the help of two jokes and a push up bra she was on her way…

A regular performer both here and abroad, Jen has written for BBC Scotland and presented a number of different shows for BBC6 Music including the weekend overnights, the weekend breakfast show and stand-ins for Lauren Laverne, Liz Kershaw and Jon Holmes.

After a hugely successful tour of her show ‘British(ish)’ at the Adelaide Fringe, Melbourne Comedy Festival and Edinburgh Fringe Festival in 2011, Jen took her new show, ‘Now & Then’ on tour in 2012 to Australia/Asia before showcasing it once more at the Edinburgh Fringe. She finished with a sell out run at London’s Soho Theatre.

‘This is as near perfect stand up as I have seen’  ★★★★★ Scotsgay
‘This is entertaining and lively stand up with a heart” ★★★★’ – The Age, Melbourne

“Brister ticks all the boxes – she’s confident, energetic and knows how to deliver a line for maximum laughs” The Scotsman

“A splendid hour of laughing till your face hurts” ★★★★★ The List