Be ready for pretty much anything when JASON COOK takes to the stage. Behind his cheerful Geordie exterior lurks a dark, sharp comedic mind 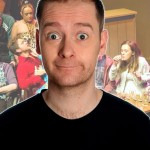 capable of taking an unsuspecting audience to places they didn’t want to go. Jason has a way of presenting true-to-life stories that drag you in and won’t let go, close to the edge but always intriguing and blessed with the sort of charm that’ll have you laughing in spite of yourself.

In 2012 Jason’s sitcom “Hebburn” was commissioned by BBC2. Vic Reeves, Gina Mckee, Chris Ramsey and Fresh Meat’s Kimberley Nixon joined the cast in a story based on Jason’s upbringing in the South Tyneside town of Hebburn.

“Jason Cook has more funny in his middle toe than most comics do in their whole body”. Chortle

”…his delivery is as smooth as brown ale…buttock-clenchingly funny”. The Herald