Award winning comedian, writer and star of the hit Irish panel show, The Panel, JARLATH REGAN has gained a reputation with the industry 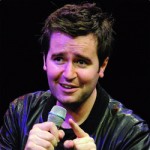 and audiences for his uplifting, inventive and relentlessly funny stand-up.

Jarlath’s numerous international comedy festival performances include appearances at The Montreal Just for Laughs Festival, The New Zealand Comedy Festival and the Melbourne, Adelaide and Brisbane festivals as a part of the Best of The Edinburgh Fest Showcase tours.

A finalist in both the BBC and Channel 4 New Comedy Awards, Jarlath is also a critically acclaimed author and experience radio and TV presenter.

“While he’s not as well-known as some Irish stand-ups, he’s every bit as talented.”  Sunday Express