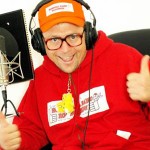 2007 Edinburgh Fringe Festival where The Times comedy critic declared it ‘the funniest show at the Fringe’. Ivan’s outside broadcast for the patients of a hospital radio station captures all the fun and excitement you’d expect from being in hospital, with games, give aways, patients requests and his special blend of music and chat. Wickedly funny.